Erik Piepenburg’s NYT article When Reality Comes With A Score features MY LIFE IS A MUSICAL, along with several other current works based on the premise of someone living in a musical! Check it out! 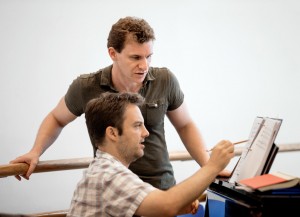 Adam Szymkowicz’s hilarious clown noir play, for which I wrote music and additional song lyrics, is returning to the stage after its first smash run last year! Opening at one of the coolest venues in NYC, The Box, at 189 Chrystie Street. Produced by Pipeline Theatre Company, directed by Andrew Neisler, and featuring a hilarious cast.

Clown Bar, a clown noir, a must-see, critically acclaimed, one-of-a-kind experience, returns by popular demand to the lower east side this summer.

Step into The Box this summer and you’ll find yourself transported to Clown Bar, a speakeasy style cabaret replete with clown mobsters, strippers, crooners, addicts, and one dashing square-jawed detective. Put on your red nose, throw back your shot of extra-funny, and get swept into this immersive who-done-it as bad-guy-gone-good Happy Mahoney confronts his past in a vengeful attempt to solve his beloved brother Timmy’s murder.

Come dressed in your finest clown attire and get a shot of extra funny on the house.

I’m playing Detective Marcus (one half of the cast) from May 3 to May 19 in the hit off-B’way comedy MURDER FOR TWO at New World Stages!